Macros are procedures that re-write code at compile time. Macros are a form of metaprogramming. Metaprogramming sounds really hard to understand, but it’s really just a program which can write other programs.

A metaprogramming example in Python

Here’s a quick example using Python, the language I’m most familiar with. It takes a number and generates code which prints every number from 0..number.

You can then pass the output of this program to Python and run it.

Many languages have macros, but today I will be exploring how to use them in Racket.

To understand macros in Racket, there are two key concepts I needed to learn about first: Syntax objects and pattern matching.

In the example I gave above in Python, I used a string template to create new code.

In Racket, macros accept and return something called a syntax object.

A syntax object is a piece of data which contains everything Racket needs to know about a piece of code in order to execute it, including:

Syntax objects can be instantiated using two forms, one is by using syntax and the other is by using the syntax prefix #'. Syntax can be inspected with the syntax->datum procedure.

Pattern matching is the ability to match a pattern in code and do something useful with it.

In JavaScript, we can do pattern matching with a destructuring assignment:

We can do similar things in Racket, using match:

Here’s an illustration I created to help me understand this: 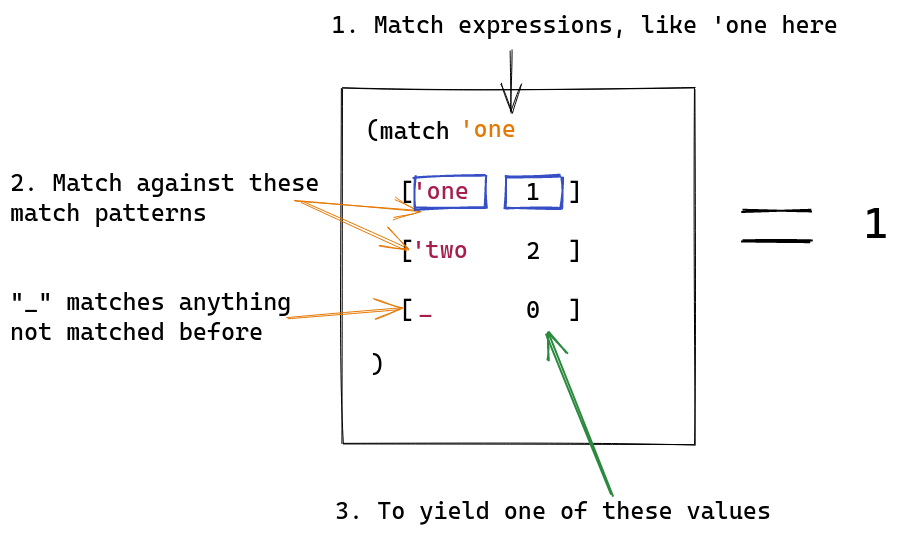 Macros don’t use this exact syntax, but they use something really similar. Knowing how pattern matching, and particularly how the value binding works, is crucial to understand macros.

The first type of macros described in the Racket Guide are Pattern-Based Macros. These macros do the following:

I’m going to try to make a for..in loop macro using define-syntax and syntax-rules. I got the idea from the article Hygenic and referentially-transparent macros with syntax-rules.

Here’s what I hope to be able to compile and run once this is complete:

Here’s the code I ended up getting to compile. It doesn’t quite work as I expect it too, so that will be something I look into tomorrow: